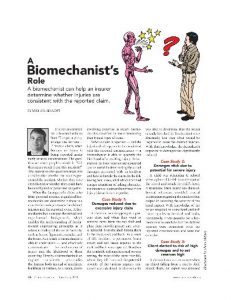 When the damages of a claim arise from personal injuries, a qualified biomechanist can determine if there is a causal relationship between the claimed injuries and the reported event. A biomechanist has a unique theoretical and experimental background, which enables the understanding of fundamental engineering principles as it relates to the biological tissues of the body, such as bones, ligaments, muscles and the brain. Thus, a biomechanist can understand – and effectively communicate – the mechanisms of injury and the likelihood of them occurring. Simply, a biomechanist is an engineer – or scientist – who studies the human body instead of machines, buildings or bridges. As a result, claims involving expertise in injury biomechanics can often be more interesting than typical types of losses.

When a claim is reported – and the injuries don’t appear to be consistent with the reported circumstances – a biomechanist can quantify the likelihood of a resulting injury. Information on how injuries are sustained can be useful in determining the actual damages associated with an incident and how to handle the claim. The article explores four different case studies in which an insurer or claims adjuster can benefit from injury biomechanics expertise.