In the 10 years I have been working in the forensics field, two of the questions I am most commonly asked are:

While these questions appear to be the same, those involved with personal injury litigation know that they are very different. In the first instance, the question is whether a collision (or any event, such as a slip and fall or product failure) would have put enough force on the body to damage the tissues. The second is asking whether the same event could result in an individual reporting subjective complaints such as pain.

Biomechanics is a unique area of study. Unlike other biological fields, such as botany or molecular biology, we cannot ethically grow a group of homogenous test subjects and control for things like age, diet, activity, and genetic make-up. Dealing with people means we have to accept a certain amount of inherent variability, yet it provides for some of the most interesting problem-solving and advanced investigation. Due to our inability to constantly monitor the forces applied to the body and the body’s response to each event, we must draw conclusions using measurements that are easier to obtain. In the field of biomechanics, one such measurement is pain. Pain can be used as a simple metric (rate your pain on a scale of 1 to 10, with 1 being none and 10 being the worst imaginable) to understand outcomes like injury, exertion levels, and fatigue.

However, pain is not a perfect indicator of injury, as it is possible to have pain in the absence of injury. In 2001, researchers wanted to better understand the relationship between a rear-end collision and the reporting of symptoms, without the intervening collision forces and any potential for injury.[1] What they did was establish a ‘placebo’ impact. For those unfamiliar, placebo treatments in research are used to mask whether someone is actually receiving an intervention, to make sure that any observed response cannot simply be attributed to the act of receiving that intervention.

For example, if we want to know how effective a drug was in battling headaches, we would randomly assign people to a test group or a placebo group. Both groups would know they were participating in a study to assess the effects of the medication on headaches, but the test group would receive the drug, while the placebo group would receive a ‘sham treatment,’ such as a sugar pill. This test set-up would allow for an analysis of whether people report improvements in their headache symptoms simply from being included in the study, despite the fact they are not actually receiving any intervention. Accounting for a ‘placebo effect’ provides researchers greater confidence that their intervention was the cause of a change, such as a reduction in headache symptoms. 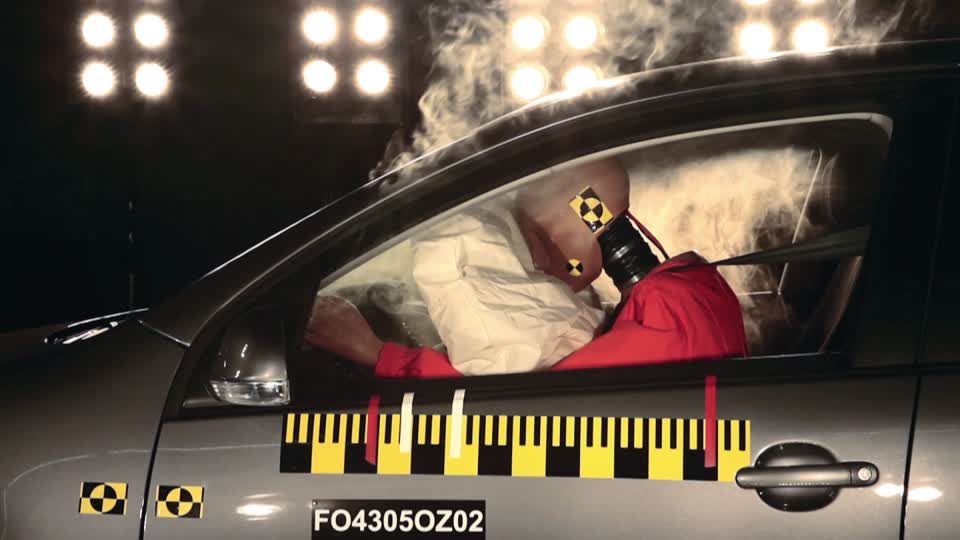 So how do you create a placebo collision? In this case, participants were seated in a vehicle and led to believe their vehicle would be rear-ended by another vehicle. To prevent the participants from anticipating the collision and bracing for impact, which could alter the outcome, the vehicle was shrouded so they could not see the approaching car. The striking vehicle was driven towards the stationary vehicle containing the participants, and the brakes were applied prior to impact to generate braking sounds. The participant’s vehicle was equipped with a weight system that would drop and smash a glass bottle when the brakes of the approaching car were applied to create the sound of glass breaking. A debris field was placed behind the participant’s car. The test vehicle was then gently rolled down a small 6-centimetre incline to create the effects of moving forward. In this way, the participants experienced gentle motion but heard the sounds and saw the debris and damage associated with a rear-end collision. The gentle motion applied would in no way cause injury.

While the study design was unique, the outcomes were even more interesting. The authors found that, immediately after the collision, 9 of the 51 participants (33 males and 18 females; average age of 32.4 years) reported symptoms including fright, neck stiffness, dizziness, palpitations, and low back burning. In this way, 18% of the participants who had not been involved in a collision immediately reported the symptoms commonly seen after low-speed rear impact collisions and attributed them directly to the placebo impact.

To gather more information, the authors followed these participants over a period of time. Within one to three days, 10 more participants (8 males and 2 females) reported symptoms including neck pain, nausea, shoulder pain, vomiting, tinnitus, headache, and fatigue. Only three of these participants initially reported pain immediately after the collision. In days 4 to 28 after the placebo collision, three participants still continued to complain of symptoms they attributed to the collision. Symptoms appeared between zero and five days after the placebo event, and in one case lasted more than four weeks. Recall that no one had actually experienced a collision, they only thought they had.

It’s not my intention to downplay the risk of injury in motor vehicle collisions. Injuries can and do happen. In fact, the authors of the above study opined that “it is clear from our study that accident victims may quite honestly believe they have been physically injured in a low-velocity collision even when they have not been injured.”

The difficulty faced by biomechanists in assessing the cause of an injury due to an event lies in the need to rely on data where injury is not measured or observable, but pain is. This same difficulty also exists for medical professionals providing opinions on the relationship between a collision and someone’s complaints, particularly when they have no knowledge of the forces of an event.

This is why a biomechanical assessment of injury causation can’t rely solely on the frequency with which symptoms are reported. It must consider the movement, accelerations, and forces acting on the body along with what the tissues can withstand prior to damage occurring. Only in pairing the subjective measurements of injury, such as pain, with objective measurements (as obtained from cadavers and test dummies) can reliable conclusions be drawn.

I end by stating that I am a biomechanist and not a pain expert. I cannot know why those exposed to placebo collisions reported this constellation of symptoms. What I do know is that they experienced almost no force on their body, and they therefore could not have been injured.