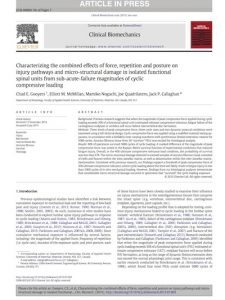 Chad Gooyers worked with his colleagues at the University of Waterloo to investigate the magnitude of peak compressive force applied during cyclic loading exceeds 30% of a functional spinal unit’s estimated ultimate compressive tolerance, fatigue failure of the cartilaginous endplate or vertebra will occur before intervertebral disc herniation.

It was found that 80% of specimens survived 5000 cycles of cyclic loading. A marked difference of the magnitude of peak compressive force was noted in the Kaplan–Meier survival function of experimental conditions that induced fatigue injury. Overall, in the 40% ultimate compressive tolerance load condition, the probability of survival was less than 67%. The micro-structural damage detected in excised samples of annulus fibrosus tissue consisted of clefts and fissures within the intra-lamellar matrix, as well as delamination within the inter-lamellar matrix.

Consistent with previous research, our findings support a threshold of peak compressive force of 30% ultimate compressive tolerance, where cyclic loading above this level will likely result in fatigue injury in less than 5000 cycles of in vitro mechanical loading. However, findings from our histological analyses demonstrate that considerable micro-structural damage occurred in specimens that “survived” the cyclic loading exposure.