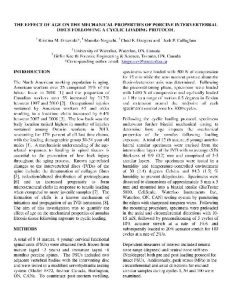 The North American working population is aging. American workers over 55 comprised 19% of the labour force in 2010 and the proportion of Canadian workers over 55 increased by 21.7% between 1997 and 2010. Occupational injuries sustained by American workers 65 and older resulting in a lost-time claim increased by 6.4% between 2007 and 2008. The low back was the body location ranked highest in number of injuries sustained among Ontario workers in 2013, accounting for 17% of all lost time claims, with the leading demographic group 50-54 year old males. A mechanistic understanding of the age-related responses to loading in spinal tissues is essential to the prevention of low back injury throughout the aging process. Known age-related changes to the intervertebral discs (IVD’s) of the spine include; the denaturation of collagen fibres, reduction/altered distribution of proteoglycans, and an increased propensity to form microstructural clefts in response to tensile loading when compared to more juvenile samples. The aim of this investigation was to quantify the effects of age on the mechanical properties of annulus fibrosis tissue following exposure to cyclic loading.