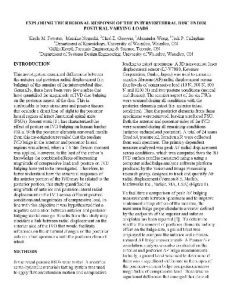 30 Forensic Engineering’s (formerly Giffin Koerth Forensic Engineering) Dr. Chad Gooyers worked with his colleagues at the University of Waterloo to investigate the differences between the anterior and posterior radial displacement of the annulus of the intervertebral disc. Generally, there have been very few studies that have quantified the magnitude of IVD disc bulging on the posterior aspect of the disc. This is attributable to bony structures and passive tissues that obstruct a direct line-of-sight to the posterior-lateral region of intact functional spinal units.

The preliminary results from this investigation explains a link between measured AF bulge on the anterior and posterior side of the IVD. Understanding how the AF responds under various loads in flexion and extension postures has clinical relevance, as IVD herniation has been observed with repeated flexion-extension under modest amounts of compressive load. The magnitude of posterior AF bulge increased in flexion as the magnitude of the applied compressive load increased. As such, the magnitude of strain and risk of tissue damage in the AF is expected to follow a similar trend.