Trees may be the cause of nuisance for real estate developers and home owners as they may cause damage to roof, foundations and structure. A wealth of literature on court cases exist, in Canada and abroad, to determine legal responsibility for property damage caused by trees. In those cases, in which mitigation measures are deemed futile, it is common that the court grants a mandatory injunction to remove the tree (e.g. Guinan vs. Ottawa, 2010).

The 30 Forensic Engineering Geotechnical team was recently involved in a forensic investigation on damages to a residential dwelling unit in Toronto caused by a tree. The house, built in the 50’s, started to manifest cracks in the foundation and in the exterior brick walls in the early 2010’s. Some structural works had been carried out ten years earlier, however, our forensic analysis excluded any relationship between the structural works and the observed damage. Our attention was immediately drawn, instead, by the presence of a tall tree in the vicinity of the house (Figure 1). 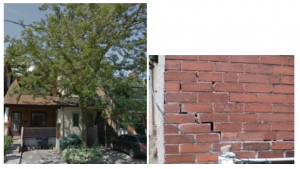 Most trees have roots that extend well beyond the spread of the branches and penetrate deeply into the soil, growing under driveways, sidewalks and foundations as they are attracted by sources of water and air such as broken drain or pipes. While taking up water, they generate significant suction in the soils, especially if these contain expansive clays.

Due to their mineralogical composition and particle aggregation, expansive clays respond to wetting and drying cycles with significant volumetric swelling and shrinkage. If a tree is present in the vicinity of a house founded on expansive soils, the suction generated by the roots near the foundations results in soil shrinkage. Moisture migration under the center of the house, may result in soil swelling and building heave. Such conditions may lead to significant differential settlements and building damage (Figure 2). Water accumulating in concrete cracks in slabs and foundations is subjected to freeze and thaw cycles and causes a progressive deterioration of the concrete with time. 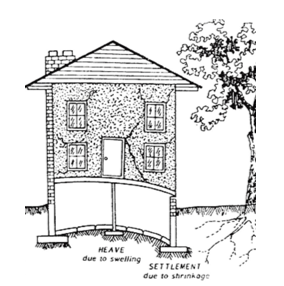 In our investigation, we identified the root cause of the building damage to be soil shrinkage due to tree roots suction. The problem was escalated by the presence of a drain, which had been leaky for many years prior to the manifestation of damage (Figure 3). In addition, the silty clays foundation soils might have caused some heave under the center of the house.

How to fix the problem. The first step is identifying the problematic soils. Canada has not produced detailed mapping efforts or hazard maps for expansive soils. However, with the exception of the northern tundra areas of the country, much is known about the location of and expansive potential of the surficial soils over much of the country. Wray (1994) reports that a relatively widespread distribution of soils with high potential for shrink/swell activity is found in Alberta and Saskatchewan and, to a lesser extent, in Manitoba. In Eastern Ontario abundant quantities of swelling clay minerals are found in the soils of the Waterton area, in Central Ontario in Beeton and Wyevale and moderate quantities in Uhthoff, Coldwater, Huntsville and Port Rowan (Guillet, 1977).

Prior to construction of a house, the problem is dealt with by avoiding planting trees near a building or siting a building too close to trees, replacing the upper 60 to 120 cm of the expansive soil with select fill, treating the expansive soils with chemical stabilization or other techniques such as pre-heaving soils by ponding with vertical drains or with lime slurry injection (Mesri and Shahien, 1989).

Remediation and repair of damage caused by shrinkage/swelling soils, on the other hand, is relatively costly, difficult and disruptive. Removing trees in Toronto, for example, requires a certificate from a certified arborist and the written approval of the Commissioner of Economic Development, Culture and Tourism, even if the tree is diseased or dead.  In Ottawa a Four Phase Assessment Process is in place to determine whether the property damage was actually caused by trees and if so, the City is responsible for providing mitigative measures. Cutting the roots may make the tree particularly susceptible to insects and disease attack, which may lead to rotting. This can make the tree structurally unsound over time. Soil treatment by chemical injection may be very expensive.

One solution that is gaining popularity, because of its technical and economic feasibility, is the construction of vertical moisture barriers around the entire perimeter of the house. The barrier is designed to minimize changes in soil moisture content and thus minimize shrinkage and swell of soils and related foundation movements. 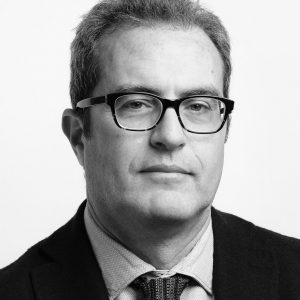 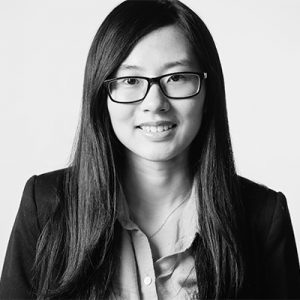 Toronto Parks, Forestry and Recreation “Let’s Get to the root of the problem”. 09 896.