Who is to blame when a human operator could have performed better than their self-driving car?

The recent fatal collision involving a late model SUV outfitted with autonomous driving technology has raised questions about the safety and readiness of the technology for today’s roads. While there are both technical and ethical questions stemming from this unfortunate event, paramount among them is whether a human driver could have performed better than the vehicle itself. Specifically, the question of whether a human driver could have avoided this collision or reduced its severity (and the likelihood of a fatal outcome) may have a substantial bearing on the forthcoming litigation that may arise from this and similar events, as well as the future of the technologies in general.

At present, little information has been released surrounding the collision circumstances. However, with what is currently available, it is possible to consider the expected behaviour of a human operator exposed to the collision scenario.

What follows is a preliminary assessment of driver behaviour and collision avoidance under certain hypothetical conditions not verified through direct observation or review of privileged incident-related documentation. The reader should not interpret this article to be an investigation of actual collision circumstances. -30- has not been involved in the collision investigation.

The collision occurred on March 18, 2018, in the northbound curb lane on Mill Avenue in Tempe, Arizona, under nighttime conditions (Figure 1). Onboard video camera footage from the autonomous vehicle captured the collision and the moments preceding it (see the embedded video, below). The female pedestrian was walking a bicycle in an eastbound direction (from the driver’s left to right), wearing blue jeans and a black top. The bicycle had a red frame, with no obvious reflectorized materials visible (Figure 2).

Onboard video of the collision

The human operator in the vehicle was not actively engaged in the task of driving. The video appears to show the driver looking down and to their right as opposed to forward toward the roadway for a significant period of time prior to impact. The vehicle did not appear to autonomously engage in evasive action (such as hard braking or steering) prior to impact, indicating a complete failure to react to the pedestrian. The initial impact appeared to occur to the right of the vehicle centreline. 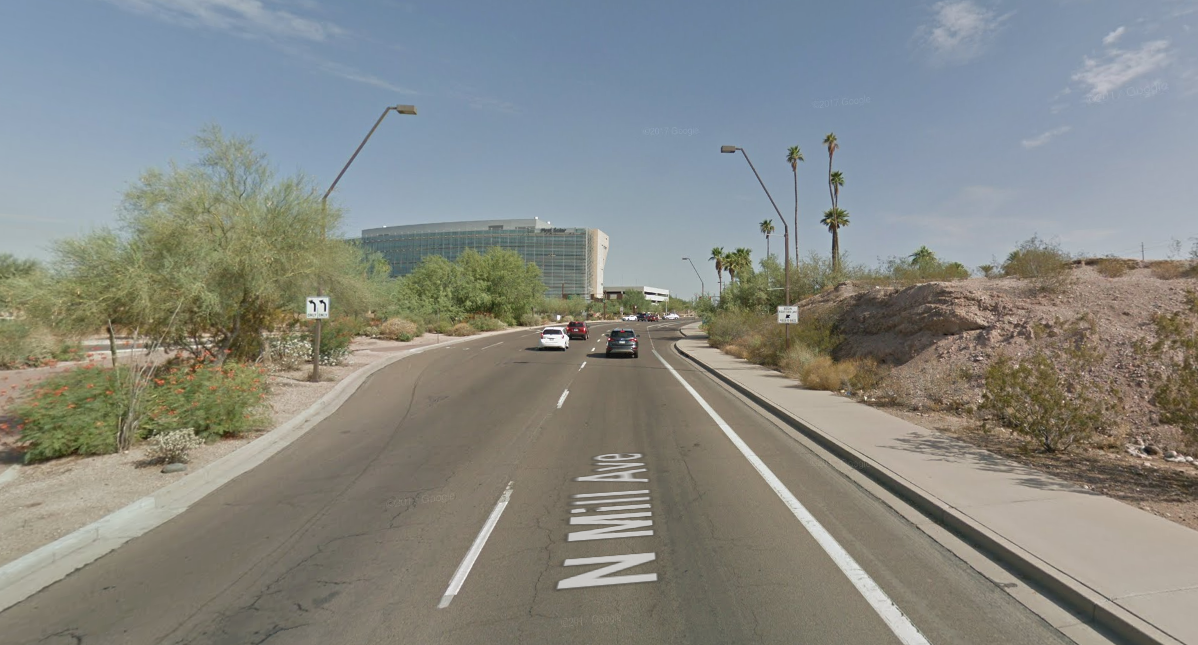 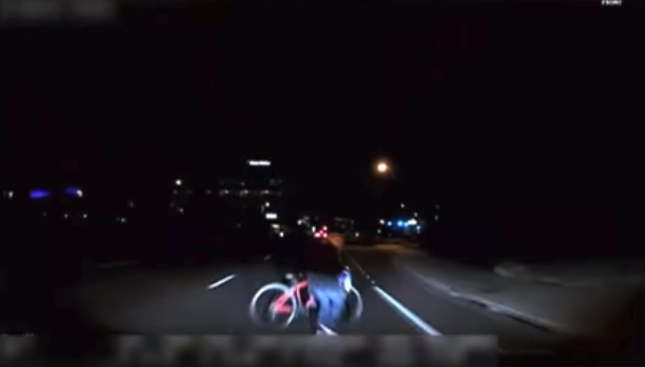 Figure 2: Screenshot of the onboard forward-facing video camera showing the pedestrian and bicycle moments prior to impact.

To understand how the response of an attentive human operator would have differed from what actually happened, we need to assess the time and distance relationships between the involved vehicle and pedestrian. In other words, we need to determine how the involved vehicle and pedestrian came together on the roadway, and their respective travel speeds and directions to the point of impact.

Given the information available, some assumptions can be made for a hypothetical assessment of this event. For the pedestrian, let’s assume that she was walking her bike at an average speed for adult females of about 1.3 metres per second (m/s) [1]. For the vehicle, we will assume that it was travelling at the speed limit of 45 miles per hour, or 72 kilometres per hour (km/h).

Given these assumptions, what was an attentive human driver capable of when approaching the pedestrian under these conditions?

Drivers will take evasive action to avoid collisions by hard braking and/or steering only when it is obvious that a collision is imminent. Under nighttime conditions, a human operator should consider the approaching pedestrian as an obvious hazard when she was first observed nearing the lane of the northbound SUV, and when the pedestrian was sufficiently illuminated to allow for her detection.

The first step to understanding a human response to a pedestrian is to determine when they can first be seen. Under nighttime conditions, roadway streetlight and vehicle headlights are the primary factors that limit what drivers can observe on the roadway. Review of the onboard video footage from the incident event indicated that there were active streetlights on both sides of the roadway near the collision location (Figure 3). However, it is not possible to determine the extent to which these streetlights allowed for a driver’s visibility of the pedestrian because the video footage was likely not calibrated to represent what the human eye could see under the same lighting conditions. 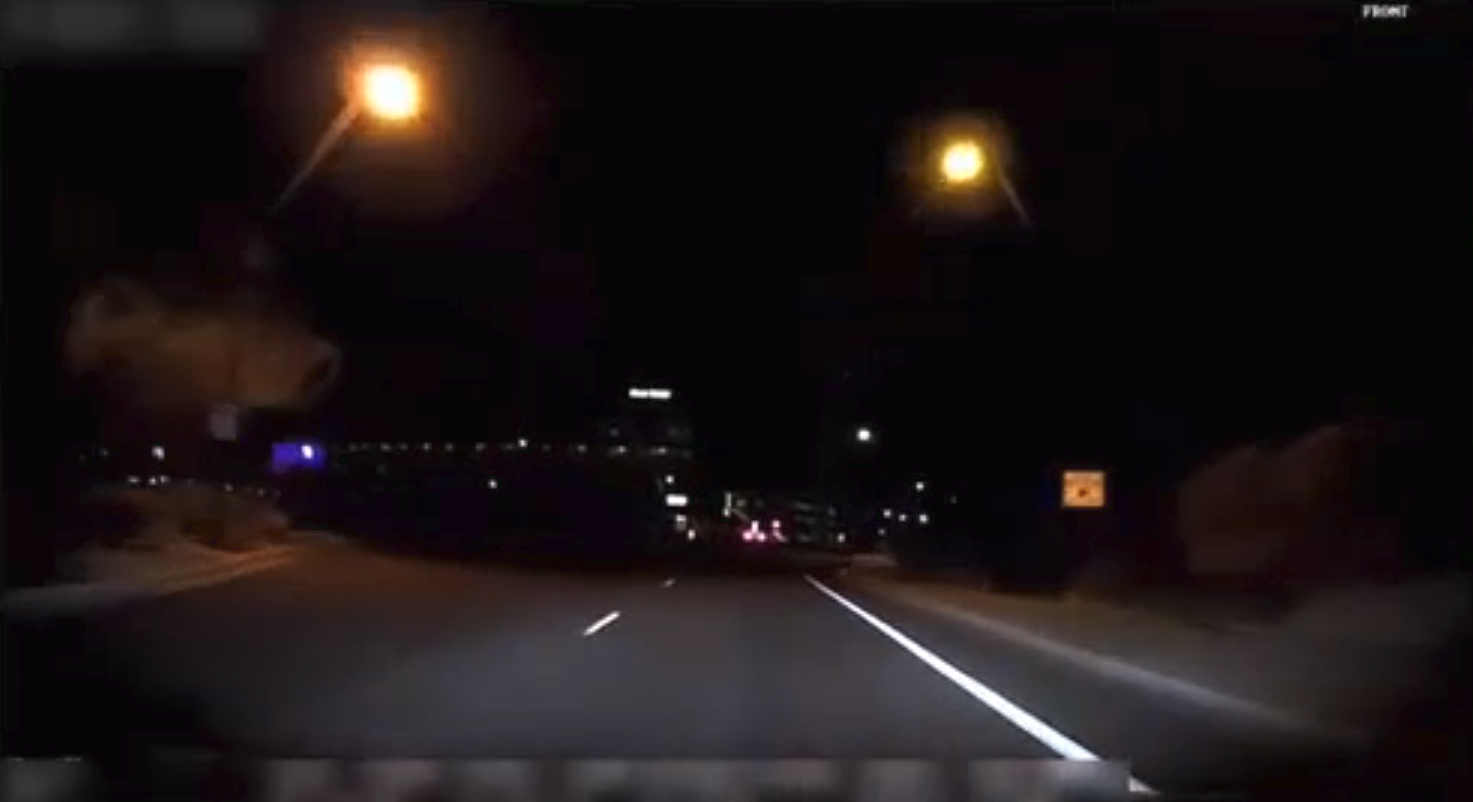 Figure 3: Screenshot of the onboard forward-facing video camera moments prior to impact depicting the streetlights near the collision site.

To determine the distance at which the driver could first observe the pedestrian, it can be assumed that the sole light sources in the area were the low-beam headlights of the SUV. This assumption provides for the worst-case scenario for the driver by assuming the streetlights made no contribution at all. Based on the lighting for new bulbs in the involved SUV, a pedestrian dressed in dark grey clothing would be detectable by an approaching driver when the vehicle and pedestrian were 53 metres and 3.4 metres away from the impact location, respectively.

Upon detecting the pedestrian, a period of time elapses before a driver can engage in evasive action. This time is known as the ‘perception and response’ interval, which encompasses the time needed for the driver to process and interpret the visual information, select a response (brake and/or steer) and then execute the evasive maneuver. From the moment that the pedestrian was first observed as a hazard, it is expected that an ‘average’ driver would initiate evasive action within 1.5 seconds [2].

What does it all mean?

Considering the hypothetical scenario detailed above, this analysis approach suggests that a driver in the northbound SUV would be expected to begin evasive action prior to impact, initiating braking/steering when the vehicle was approximately 23 metres away from the impact location. Under full braking, the SUV could have been slowed to approximately 23 km/h by the time it reached impact, with 1.8 seconds of braking [3].

Braking by a human operator could have allowed the pedestrian to pass in front of the vehicle and avoid impact altogether.

A second possible outcome is that the collision may still have occurred, but if so, at a significantly lower impact speed. Had a human operator detected the pedestrian and braked (as expected), the SUV could have slowed to about 23 km/h. At this speed, a fatal outcome would not be expected. A 2011 review article [5] estimates the probability of a fatal outcome at less than 5% for impact speeds up to 25 km/h. Further, research suggests that the likelihood of a serious injury outcome (requiring hospitalization) is less than 15% for an impact speed of 25 km/h or less [6].

A fatal outcome would not be expected if a typical human operated the vehicle.

To summarize, if the human operator was attentive, and responded in a typical fashion with emergency-level braking, it is unlikely that the pedestrian would have sustained a fatal outcome. Moreover, the likely severity of the pedestrian’s injuries would have been significantly reduced.

The point of autonomous driving technology is to remove the human element from the driving ecosystem. As a by-product of these technologies, the potential for human intervention in critical collision situations is significantly and purposefully limited. Of course, the overarching expectation is that the hazard detection technology onboard an autonomous vehicle would identify a pedestrian or any other hazard earlier than a human operator could, and react more quickly, preventing more collisions. However, the very real outcome of this impact raises difficult questions for developers of autonomous driving technology to answer.

This recent event demonstrates that, while autonomous vehicles permit human inattention to the driving task, they are still unable to perform to the level of human capacity in certain situations. One is left wondering about how the question of blame will be handled when a human operator could have performed better than a self-driving car.

Dr. Adam Campbell is a Senior Associate in Human Factors and Personal Injury.

Dr. Chad Gooyers is a Senior Associate in Biomechanics and Personal Injury.

Mr. Harrison Griffiths is an Associate in Collision Reconstruction.