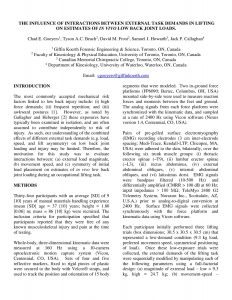 30 Forensic Engineering’s (formerly Giffin Koerth Forensic Engineering) Dr. Chad Gooyers worked with his colleagues at the University of Toronto, the Canadian Memorial Chiropractic College and the University of Waterloo to study the effects of external load magnitude, movement speed and symmetry of initial load placement on the lower back during an occupational lifting task.

The most commonly accepted mechanical risk factors linked to low back injury include: high force demands, frequent repetition and awkward postures. However, these exposures have typically been examined in isolation, and are often assumed to contribute independently to risk of injury. As such, our understanding of the combined effects of different external task demands on low back joint loading and injury may be limited.

Studying the effects of external load magnitude, movement speed and symmetry of initial load placement on the lower back show that risk factors should not be viewed in isolation. Rather, injury prevention efforts need to consider the complex interactions that exist between external task demands and their combined influence on internal joint loading.