At 30 Forensic Engineering, our biomechanics experts are frequently retained to investigate whether a concussion is likely to occur during a low speed rear end collision. 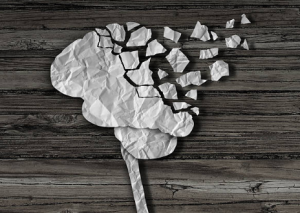 Clinical assessments of concussion are typically based on subjective symptom reporting and patient history, making it difficult to objectively confirm or refute a causal link between a concussion diagnosis and a motor vehicle collision. Loss of consciousness, a reduced Glasgow Coma Scale (GCS) score and positive diagnostics (e.g., medical imaging studies) are rarely present in cases of reported concussion. Additionally, when formulating a clinical impression, most medical professionals have a limited understanding of the severity of the head exposure a patient experienced.

Because of these limitations, acceleration-based head injury metrics can be useful for quantitatively evaluating the severity of the head impact during the collision.

What follows is a summary of some of the recent published literature that should be considered when evaluating whether a concussion is likely to have occurred in a low speed rear end collision.

During a rear impact collision, occupants in the vehicle will initially move rearward relative to their seat. Essentially, they sink back into their seat as the vehicle is driven forward beneath them. Their motion into the seat will compress the padding and may cause temporary rearward bending of the seatback itself.

Later in the collision, the seatback will return to its initial position, pushing the occupant forward. This results in a ‘rebound’ of the occupant within the vehicle. During this rebound phase, the locking mechanism of the seatbelt typically engages, limiting the extent of an occupant’s forward motion.

For properly restrained occupants, contact with forward structures in the vehicle (such as the steering wheel or dashboard) is not expected to occur during low speed rear end collisions – head contact is limited to the padded headrest.

The Insurance Institute for Highway Safety (IIHS) has conducted sled tests (i.e., simulated rear impact collisions) for the last decade with a properly restrained, 50th percentile male Biofidelic Rear Impact Dummy (BioRID II) instrumented to evaluate the crashworthiness of head restraints and the dynamic safety ratings of automotive seats (Figure 1). The peak acceleration of these sled tests, which are ongoing, is 10 g, and the duration of the collision pulse is approximately 90 milliseconds (ms; i.e., faster than the blink of an eye). These tests are intended to simulate a 20 mph (approximately 32 km/h) rear-end collision with another vehicle of the same weight, which results in a collision severity or ‘delta-v’ of approximately 16 km/h.

A recent study by Courtney et al. [1] examined the head accelerations recorded from the BioRID II during 34 rear impact sled tests conducted by the IIHS from 2009 to 2017 with 10 passenger car models that were leading in sales in 2017 (including the Toyota Camry, Toyota Corolla, Honda Accord and Honda Civic). The average peak resultant linear acceleration was 21.4 g (with a range of 13.6 to 27.3 g). The authors noted that this value was associated with a negligible risk of concussion according to contemporary concussion risk curves, discussed in more detail below. 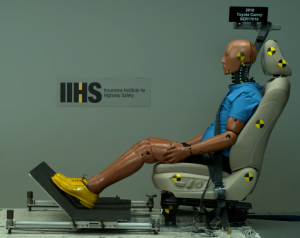 Figure 1: Still-frame image (pre-test) from the IIHS Test No. SER17016, which was conducted with a BioRID II dummy in the front seat of a 2019 Toyota Camry.

To give these values context, we can look at non-injurious activities where head impacts occur, such as heading a soccer ball. In youth soccer, this activity has been shown to result in head acceleration levels ranging from 4.5 to 62.9 g, with many impacts resulting in accelerations in excess of 20 g [2]. This means that the peak head exposure during low speed rear end collisions is comparable to what the head experiences during a routine game of youth soccer.

A similar paper by Scanlon et al. [3]  further examined the head acceleration data from the IIHS rear impact testing. Data from 601 simulated rear impact sled tests on 2014 to 2018 model year vehicles were analyzed, with an average collision severity of 15.6 ± 0.26 km/h. Findings from this work demonstrate that reductions in the Head Injury Criterion (HIC15), which considers both the peak magnitude and duration of head accelerations recorded from the BioRID II, were observed across model years. Put simply, vehicles seem to be improving in terms of reducing the head accelerations in rear-end collisions.

For reference, the distribution of HIC15 values across model years examined is reproduced as Figure 2. Based on Scanlon et al.’s study data, the highest HIC15 score from the IIHS sled tests over the last 10 years resulted in less than a 1% risk of concussion.

Similar findings have been presented in a recent study by Pasquesi et al. [4], who conducted full-scale crash tests with two 2014 Honda Accords occupied with restrained and instrumented 50th percentile adult male anthropomorphic test dummies (known as ATDs). In total, four crash tests were conducted that resulted in rear-end collision severities ranging from 5.6 km/h to 19.5 km/h. The study found the following:

Based on these findings, the authors concluded that the head acceleration-based injury metrics were low and corresponded to a negligible risk of concussion.

The authors plotted the peak acceleration-based head injury metrics from the staged low speed collisions on concussion risk curves from the published literature, which have been reproduced as Figure 3 and Figure 4. 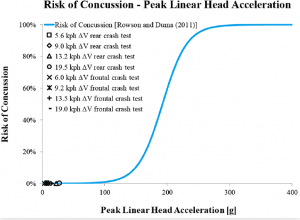 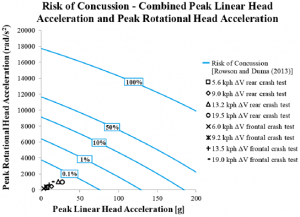 There have been several head acceleration-based risk curves for concussion proposed in the published biomechanics literature, which collectively are based on thousands of head impacts, including both concussion cases and controls. And while the 50th percentile risk of concussion across the different risk curves varies considerably (ranging from approximately 80 g to 233 g), the abovementioned data from the IIHS simulated collisions corresponds to less than a 5% risk of concussion according to the most conservative model (Figure 5). 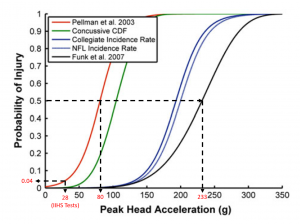 Figure 5: Comparison of injury risk curves for concussion from the published literature. (Reproduced from Rowson and Duma [6]). The max head acceleration from the IIHS sled tests (28 g) corresponds to a 4% risk of concussion according to the most conservative model.

A previous study by Elkin et al. [7] compared head acceleration data from both rear-end collisions and impacts to the rear of a football helmet using a numerical computer model of the human brain [8].

For the rear-end crash tests, 19 different vehicles were towed rearward into a rigid barrier resulting in collision severities ranging from 9.3 km/h to 17.6 km/h. An instrumented 50th percentile male ATD occupied the driver’s seat and wore a snug lap and shoulder seatbelt for each test. 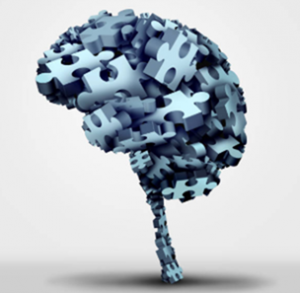 The authors reported that test 3.6 from this study “generated peak brain strains similar to those estimated for a 9.3-m/s [33.5 km/h] football impact, a level that represented the average impact speed for 25 reconstructed concussion in professional football.” However, the peak linear (28.8 g) and angular (1,901 rad/s2) head accelerations measured in test 3.6 were considerably lower than the outputs that resulted from the 33.5 km/h impacts to the rear of a football helmet, which resulted in peak linear head accelerations ranging from 84 to 119 g (i.e., approximately three to four times  greater than test 3.6) and 4,718 to 6,036 rad/s2 (i.e., approximately two to three times greater than test 3.6), respectively.

For reference, a comparison of the linear and rotational head acceleration traces from case 3.6 and the simulated football head impacts are shown in Figure 6. It is notable that the football head impacts resulted in significantly greater magnitudes of peak linear and rotational head accelerations that were applied over a much shorter duration. It is clear that despite the findings in the study, the head impacts in the two scenarios were not comparable. 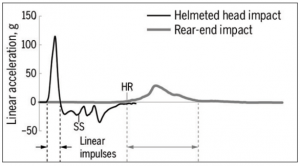 Figure 6: Comparison of the time-varying linear (upper graph) and rotational (lower graph) head accelerations recorded during a simulated rear impact collision severity of 15 km/h (case 3.6; thick gray lines) and an impact to the rear of a football helmet at 33.5 km/h (thin black line). HR represents the time of head restraint contact during the rear impact collision; SS is the point where the football helmet simulation was stopped because of secondary contact. (Reproduced from Elkin et al. [7]).

History of Concussions and Tolerance to Head Impact

Previous research conducted by Guskiewicz et al. [9] has demonstrated that a history of concussions may be associated with an increased risk of future concussive injuries, with those study participants with one diagnosed prior concussion being 40% more likely to sustain a subsequent concussion than those with no concussion history.

However, the published biomechanical data does not allow for a quantitative scaling (if any is required) of the injury tolerance based on this history. It is possible that occupants with a history of concussion are more susceptible due to their history. However, the reduction in their tolerance to head impact would have to be significant (a reduction of more than 70%) for their head contact with the padded headrest to cause a concussion.

For healthy individuals with no prior history of head injury, the peak head accelerations experienced during low speed rear impact collisions are well below the published threshold associated with concussion.