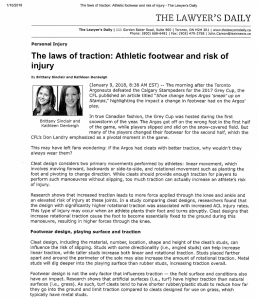 The morning after the Toronto Argonauts defeated the Calgary Stampeders for the 2017 Grey Cup, the CFL published an article titled “Shoe change helps Argos ‘sneak’ up on Stamps,” highlighting the impact a change in footwear had on the Argos’ play.

In true Canadian fashion, the Grey Cup was hosted during the first snowstorm of the year. The Argos got off on the wrong foot in the first half of the game, while players slipped and slid on the snow-covered field. But many of the players changed their footwear for the second half, which the CFL’s Don Landry emphasized as a pivotal moment in the game.

This may have left fans wondering: if the Argos had cleats with better traction, why wouldn’t they always wear them?

Cleat design considers two primary movements performed by athletes: linear movement, which involves moving forward, backwards or side-to-side, and rotational movement such as planting the foot and pivoting to change direction. While cleats should provide enough traction for players to perform such manoeuvres without slipping, too much traction can actually increase an athlete’s risk of injury.

By: Kathleen Denbeigh and Brittany Sinclair