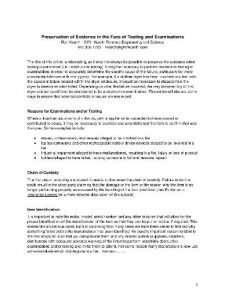 By the very nature of some of the evidence received, it’s almost impossible to “preserve” evidence. In order to conduct testing, some evidence may need to be taken apart – or have “destructive testing” implemented. The article discusses some ways to ensure that potential conflicts or issues are minimized.

First off, there must be a reason for examinations and/or testing. Where a loss has occurred and a device, part or appliance is suspected to have caused or contributed to a loss, it may be necessary to examine and potentially test the item to confirm that was the case. The first step in ensuring a successful case is to document the chain of custody. Next, it is important to note the make, model, serial number and any other features that will allow for the proper identification of the manufacturer of the item so that they can be put on notice, if required.

It may seem like “putting the cast before the horse” to come up with some ideas of how the item could have failed, prior to examining it for more conclusively determining that very point. But different failure scenarios could result in different consequences for that item.

There are also a variety of non-destructive tests that can be employed in many instances, especially when the failed item is a simple device, such as failed pipes or hoses, failed couplings, failed steel building elements, etc. It’s important to develop an examination and testing protocol for the subject evidence – it provides consensus amongst all parties involved and avoids conflict down the line.