With the Superbowl just around the corner, we thought we would provide an update on the new helmet technology you may have noticed throughout the 2018 season and the steps the NFL has taken to address the steady number of concussions sustained by NFL players.

Over the past 7 years, the NFL has seen a steady rate of concussions during the football season.  The 2016 NFL injury data indicated that an average of 220 concussions are reported each season (159 was the lowest reported number of concussions in 2010; the highest was 275 in 2015).[1] The National Collegiate Athletic Association (NCAA) reported that concussions make up 7.4% of all injuries in college football players. 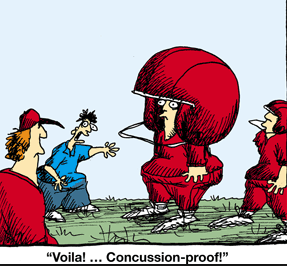 Concussions occur when the head is exposed to a high-energy impact resulting in large head accelerations. Pellman et al.[2] found that the average linear acceleration associated with concussion was 98 g, while Rowson and Duma,[3] who collected data from both professional and collegiate football players, found the average was 105 g. To put this into perspective, activities of daily living such as plopping into a chair or hopping off a step may result in head accelerations of 8.5 and 6.7 g, respectively, while linear head accelerations associated with heading a soccer ball can range from 11.9 to 28.1 g in girls’ youth soccer.

The typical football helmet is designed to prevent skull fractures and consists of a hard plastic shell with thick padding on the inside. The overall design of football helmets has not changed significantly since the 1970s when Riddell first introduced energy-absorbing technology to ‘soften impacts.’[4] However, in 2014, Riddell introduced smart technology called ‘InSite’ into their helmets. InSite sends alerts to coaches when a single significant head impact occurs or when multiple head impacts occur that, when combined, may pose a risk to the player. However, this technology only shows an indication that a threshold for injury has been exceeded and does not show coaches the actual head acceleration sustained by the player.

Riddell and Xenith used to be the only two authorized suppliers of helmets to the NFL. In 2017, CBS Sports reported that the Zero1 helmet, by VICIS, was used by 25 NFL teams in the 2017 season. This season, 28 out of the 32 NFL teams are sporting the new helmet by VICIS, meaning that more than half of the players in the NFL were using this helmet.[5]

The Zero1 helmet uses concepts similar to that of vehicle bumpers and is the first helmet designed to mitigate concussion risk; however, VICIS is careful to warn that “no helmet can prevent concussions” and “a correlation between impact reduction and a reduction in concussion risk has not been established” with their new helmet design.

This new technology aims to dissipate energy equally throughout the helmet during both linear and rotational accelerations. The new design allows the helmet to elastically deform at impact (i.e., deform and return to its initial shape) and uses individual columns (‘pillars’) instead of a thick layer of padding, which allows bending and deformation under loads to help share and dissipate the energy from head impacts.

All helmets must meet the National Operating Committee on Standards for Athletic Equipment (NOCSAE) to pass impact limits for linear acceleration. Supplementary to this is the Virginia Tech Helmet Rating which ranks helmets based on which ones best reduce concussion risk. The 5 star system indicates which helmets decrease head accelerations best.

The VICIS, Riddell, and Xenith helmets all meet the NOCSAE requirements, and the 2017 NFL/NFPLA Helmet Laboratory Testing Performance Results Poster ranked all three helmets in the top ratings for helmet selection in the NFL.[6] Both Riddell and Xenith have received 5 stars in the Virginia Tech Helmet Rating for several of their helmets, and just this year,  the VICIS Zero 1 received 5 stars and ranked second overall in all helmets tested by Virginia Tech.

While no helmet can completely eliminate the risk of a concussion, we are interested to see how the rate of concussion reporting will be influenced by this new technology and whether it will be an integral part in the next step towards prevention and mitigation of head injuries in youth sports as the technology trickles down to the general public. The current cost of the VICIS helmet is at a steep $1,500, which limits its attractiveness to college and youth players.

Another twist in the NFL this year was the new head contact ruling: “It is a foul if a player lowers his head to initiate and make contact with his helmet against an opponent.” A combination of improved technology and rule implementation may just be the key to start seeing a reduction in concussion reporting in the NFL. Hopefully, the steps being made in this sport will trickle throughout the sporting industry and youth sports.