When collisions occur and insurance claims are being filed, questions pertaining to liability and the damages incurred by the involved parties are usually at the forefront of the case. But what happens when the details of a collision call into question the legitimacy of the collision itself?

Take, for example, a collision claim made regarding a Cadillac that had been T-boned. The provided photographs taken by the repair shop captured damage[1] consistent with a T-bone impact; however, the reported circumstances surrounding the collision raised a few red flags. For instance, the driver reported travelling with four passengers but was unable to recall the names of the occupants he was travelling with. The collision occurred in the early morning hours at a relatively isolated industrial park. The driver reported travelling around 30 km/h through an intersection when his vehicle was struck by an unidentified SUV that ran a stop sign and then fled the scene. Despite the relatively serious nature of the collision, the driver did not call the police. 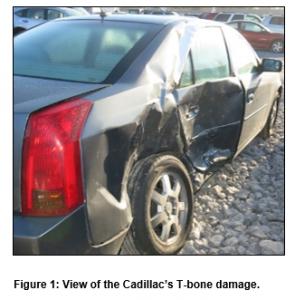 With an increasing number of fraudulent claims being filed, insurance companies have started to take action to minimize illegitimate claim payouts. One way that this is done is through working with collision reconstruction experts on fraudulent claims. Our experience with vehicle collisions and our expertise with interpreting vehicle damage allow us to test the validity of the reported circumstances against scientific principles which govern the collision.

In the case of our T-bone example, while the damage may have appeared consistent with the reported information at first glance (Figure 1), the surrounding details were suspicious enough to obtain an expert examination and opinion on the likely physical circumstances surrounding this collision.

During our vehicle examination of the Cadillac, we observed a partial imprint on the right rear door that matched the features of a vehicle grille; something which had not been previously visible in the photographs taken by the repair shop. Based on the size and shape of the imprint, we determined that the striking vehicle was most likely a third generation Chevrolet Equinox.

More notably, however, were the vertical as opposed to horizontal scratches within the imprint. This small detail indicated a rather large discrepancy between the driver’s reported speed and the actual speed at impact. Take, for example, a stamp imprint on a piece of paper. If we hold the stamp steady while pulling the paper away, the ink will smear in the direction the paper is pulled. Similarly, if the Chevrolet’s grille struck the side of a Cadillac that was moving across its front, we would expect horizontal scratches from the front of the Chevrolet to form on the side of the Cadillac.

Figure 2: View of the grille imprint on the Cadillac (left) compared with the grille of a third-generation Chevrolet Equinox (right)

Figure 3: View of the motion of the Cadillac rocking back and forth on the suspension to create the observable imprint.

We also imaged the vehicle’s event data recorder (EDR) or ‘black box’ – a device that is capable of capturing collision related data such as vehicle speed, throttle, or brake application, as well as airbag deployment commands. The data within the device confirmed what the damage already suggested: that the Cadillac was stationary for the 5 seconds preceding the collision.

Furthermore, while the side curtain airbags appeared deployed, the EDR indicated it had never commanded the deployment. The vehicle headliner was not torn in a manner reflective of natural airbag deployment, and after testing the electrical continuity, we confirmed the airbags had been physically drawn from the vehicle and were not deployed as a result of the impact.

Of course, not every contentious claim is going to be an elaborately staged collision. Damage can also be mispresented in the hopes that the insured will receive a payout without the penalty of increased premiums for purposeful damage. These claims often present as ‘hit and run’ cases, where the owner alleges or believes another vehicle struck their vehicle while it was left unattended, when in fact, the vehicle actually struck a stationary object like a parking bollard. These types of collisions are typically of low severity, and therefore, any collision related data that might otherwise have been captured by the EDR, is left unrecorded.

To complicate the matter, vehicle-related damage and object-related damage can be confused for one another if careful examination of the damage isn’t undertaken (Figure 4). It is therefore crucial to remain critical of what can be readily seen in provided photographs and to be mindful of what the specific damage attributes tells us in their entirety.

For example, the texture and depth of damage, the consistency and appearance of any external deposits, and any paint transfer that may exist can help identify if the damage is vehicle related.  Changes in the directionality of the damage can also help determine if a vehicle was stationary or moving when the damage occurred and assist in determining if the reported information is legitimate.

In contrast, a vehicle exhibits different damage characteristics when it strikes a rigid (stationary) object. This can include scratches and scuffs that are sharp, linear, and similar in appearance and texture to course-grit sandpaper. Oftentimes, rigid objects create uniquely horizontal patterns, where the damage appears visually consistent throughout the area of damage. This is because stationary objects, like concrete pillars or parking bollards, do not deform when scraped against, so the force applied as a vehicle moves past these types of objects remains consistent.

Some cases (if investigated in a timely manner) also benefit from having the expert attend the collision site. For example, in cases where drivers have struck their vehicles against rigid objects (whether knowingly or not) evidence of vehicle contact exhibited by vehicle paint can remain against the struck surface. Being able to locate and identify the exact object that caused the damage provides irrefutable physical evidence that can be relied upon when assessing the validity of the reported circumstances.

When it comes to identifying fraudulent or misrepresented claims, correctly identifying and interpreting the physical evidence is of utmost importance. The physical evidence, whether it be the damage characteristics, the information within the vehicle’s EDR, or the evidence left at the collision site, tells a compelling story. This evidence allows experts to apply sound scientific principles to determine factors like vehicle speeds, object type, and even driver behaviour, all of which can be compared against the reported events.

In the end, regardless of whether a collision is staged, or the damage is simply misrepresented, the physical evidence left in the wake of an impact will always paint an honest, unbiased picture of what really happened.

[1] The provided photographs are for illustrative purposes, taken from the NASS database and exemplary cases. 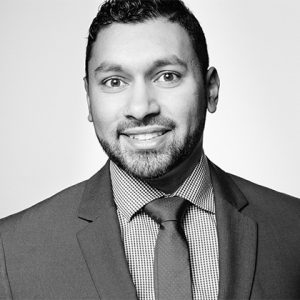 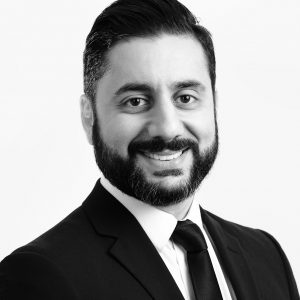