“The changing face of operational power”[4] 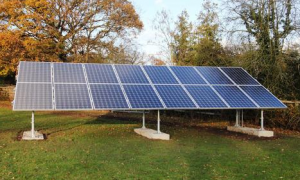 This is the kind of headline you may have come across in the last few years. And yes, recent years have witnessed a surge in the construction of solar farms, with ground mounted PV arrays harnessing solar energy. But the picture is not all rosy, while the (geotechnical) design of such relatively light weight structures appears to be straightforward, failure to properly design solar panel foundations and, more specifically, to meet the acceptable serviceability (deformation) limits still occurs. In this article, I will be discussing this matter in an attempt to help decision makers (particularly non-geotechnical engineers) have a better understanding of the problem and therefore make well-informed decisions. This includes the common foundation systems supporting ground-mounted solar panels, the typical foundation design deficiencies, and finally some advices to aid in preventing such failures.

Why would I care?

Whether you are a developer, contractor, engineer, insurer or lawyer of any of the beforementioned, have a read of the following quoted lines from the study published by Abduahad et al. in 2010 in the Canadian Geotechnical Journal, where they presented the results of their review of 41 legal cases related to geotechnical engineering in Canada between 1982 and 2006.

“Most claims in geotechnical engineering are caused by ‘‘inaccuracies in the design plans and specifications’’ and ‘‘different soil conditions and recommendations than expected from the geotechnical report.’’

“Canadian courts allowed all the actions made for the claim issue ‘‘owner’s failure to disclose important information.’’

“Canadian courts allowed 83.3% of the actions made against engineers in disputes concerned with ‘‘inaccuracies in the design plans and specifications.’’

“It is worth repeating the conclusions reached by Mirza (1992) that a defence based on exculpatory clauses is at best a weak defence and that a QA/QC practice strategy is required to ensure that errors and omissions are minimized”.

The selection of the suitable foundation system to support ground mounted solar panels, and virtually any other structures, depends on many factors including the subsurface conditions, the imposed loads from the supported structure, the environmental conditions, and the site-specific constructability constraints. Generally, the foundation systems used in industry can be grouped in in two broad categories: shallow foundations (e.g. spread footings, strip footings…etc) transferring the loads to the shallow deposits, and deep foundations (also referred to as piles) transferring the loads to the deeper deposits.

Among the latter type, the use of a helical piles seems to be recently gaining an increased popularity in Canada. This popularity may be attributed to its various construction advantages including the quick and quiet installation technique, the limited (if any) soil spoils, the almost vibration-less installation, and the quality control advantage of correlating the piles installation torque to the expected piles axial resistance. Furthermore, helical piles are often able to provide considerable uplift resistance, typically governing the design of solar panels due to, among other sources, the exerted wind pressures on the exposed panels.

So, why does failure happen? (now we’re talking science) 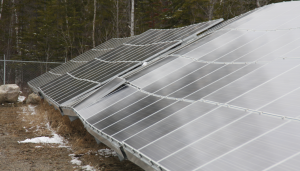 A successful foundation design should not only ensure the structure stability (i.e. avoid collapse), but also be adequately designed to meet the serviceability requirements (i.e. only allows for less deformations than the acceptable limits). While the failure to meet the former seem less common, exceeding the acceptable levels of deformation seems, unfortunately, more frequent.

Personally, I can say that a combination of factors, rather than a single deficient element, mostly result in foundations damage. such factors include poor design, improper construction activities, poor (or lack) of quality control process, the use of improper material, and poor communication between structural and geotechnical engineers, resulting in the application of incompatible design methodologies.

Experience shows that frost related problems present a frequent (if not the most) cause of ground-mounted foundation deficiencies in Canada. To understand how cold weather may affect the stability of foundations, one has to understand some of the interesting features of soils in reaction to temperature change.

Freezing of some soil deposits results in volumetric expansion, ending up in heaving any placed structure on or in this frozen layer. With the temperature rise and frost thawing, the same soil deposits may lose a considerable percentage of its strength possibly ending up with excessive deformation or collapse the structure. Furthermore, strong bond may develop between frozen soil and the embedded foundation, resulting in the latter following the soil movement and ultimately damaging the supported structure.

Another common factor contributing to foundations failure is the erroneous application of design calculations, or the incompatible design methodologies considered by structural and geotechnical engineers. In simpler words, to have a “like for like” comparison the expected applied loads determined by the structural engineer have to be calculated in a comparative methodology to that followed by the geotechnical engineer in estimating the foundations resistance.

Numerous other reasons may result in foundation failure that I may not discuss here for practical reasons. If I had, however, to choose a single last factor to mention, I would focus on the poor subsurface geotechnical investigations. Saving a few thousands on geotechnical subsurface investigations may end up in inaccurate identification of the subsurface profile and possibly inaccurate interpretation of the soil properties. And obviously enough, no merit in applying a proper design methodologies, or using the most sophisticated design software, in absence of accurate subsurface profile identification upfront.

So, how to avoid?

I would first like to remind myself and other geotechnical engineers not to compromise on the quality of their work. Don’t hide behind the “I am not responsible for my work” disclaimers. Additionally, always remember that effective communication with the project structural engineer is of key importance for a successful design.

For owners, developers, and whoever will end up paying the project bill: don’t underestimate the importance of geotechnical engineering work. Down the road, you may end up paying multiples of what you thought have saved on that subsurface investigation or that “quick” design.

As well, always ensure that a well-qualified geotechnical engineer carries out the foundation design. If in doubt, seek the help of an expert to review the work (and needless to say, follow his recommendations).

For contractors…Well, have a read:

“Before taking legal action, it is important that contractors understand that, in general and according to precedent cases, Canadian court decisions do not compensate the contractor for a changed soil condition unless the change is substantial” Abduahad et al.(2010) 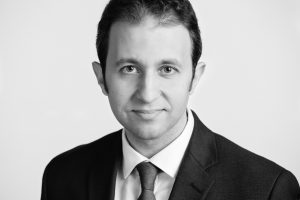