A brief look into the behavioural science and logic behind ‘Zombie Laws.’

Although the excitement and preparations for trick-or-treaters have been put aside in preparation for the next holiday season, this year it seems that talk of street wandering zombies has hung around longer than in years passed.

Prompted by public safety concern, governments have begun to act to eliminate zombies from our roadway. Spawning out of Honolulu, Hawaii, the aptly-termed Zombie Law took effect to curtail the use of mobile devices by pedestrians while crossing the road. The international response to this law has been swift, as talks of similar laws have crossed the ocean reaching mainland water coolers, offices of the politically inclined and everywhere in between. 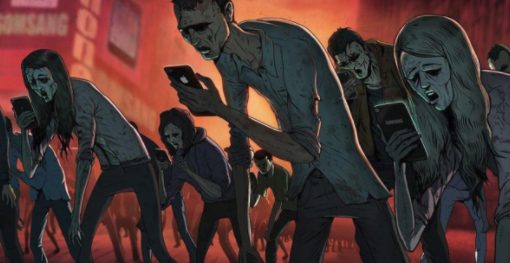 In Ontario, Canada, Bill 171 (“Phones Down, Heads Up Act”)[1] has been proposed as an amendment to the Highway Traffic Act with an escalating fine structure for repeat offender zombies. Acknowledging that it takes two-to-tango, Bill 171 also mandates annual distracted driving awareness campaigns to combat the concerning number of pedestrians involved in collisions from both sides of the equation.[2]

Distracted driving has been the focus of ample research and legislation over the years. Lagging is a similar focus of attention on pedestrian behaviour and workable measures to reduce catastrophic outcomes. The aim of this article is to shed light on these issues and science leveraged by these new and proposed laws.

Captivated by the attention-sucking capacity of mobile devices, humans shape-shift into dangerously limited versions of themselves. Depending on your penchant for horror movies or Michael Jackson’s Thriller, your understanding of what makes a zombie, a zombie, may differ. Unfortunately for all the MJ fans, not all zombies present in a choreographed dance routine. However, the Hollywood version of zombies can generally be classified as slow-moving, near-living, sometimes drooling, creatures numb to logic or reason. They proceed how they choose with complete disregard for much else. Unfortunately, the city-dwelling, text/Instagram/Snapchat/Facebook (etc)-reading, the more-alive urban civilian can sometimes be shockingly and dangerously similar.

This is precisely the basis for the Zombie Law. The thinking is that by decreasing pedestrian distraction while entering the roadway, pedestrians are able to be more attentive to traffic conditions and will make better and/or more rapid decisions about when or whether to cross.

“…the reality is that in many pedestrian/vehicle collisions, the pedestrian often has the last opportunity to avoid impact…”

The science of otherwise ‘normal’ pedestrian behaviour is clear that non-distracted individuals look to where potential hazards can emerge both before and during roadway crossing. It is thought that by legislating a limit to the extent of mobile-device use before and while crossing the road, we will foster more attentive pedestrian crossings.

From analyzing human behaviour in hundreds of collisions, I can tell you that the reality is that in many pedestrian/vehicle collisions, the pedestrian often has the last opportunity to avoid impact, simply because they can change their direction and speed much more quickly than the approaching vehicle. Deterring pedestrians from focusing on a device in front of their faces should allow more of them to take advantage of these opportunities when they are presented.

A defining feature of zombies is their slow and shuffling gait pattern. There is truth to this myth! Research has shown that pedestrians walk more slowly when engaged in distractive tasks (like talking) than if they walk without engaging in distraction.[3]Believe it or not, walking requires cognitive resources (i.e., brain power) and the more disengaged you are in the task of walking, the slower you will move. Some folks will even come to a complete stop.[4] We have all witnessed these oddities of pedestrian behaviour. If you haven’t, you will soon.

The relevance of walking speed is high when related to pedestrian crossings. It is logical that roadway crossings are inherently dangerous because they are a place of mutual conflict between pedestrians and vehicles. Simply put, the more time that pedestrians spend on the road, the more likely they are to be in conflict with vehicles. Unfortunately, crossing signal timings do not yet include a ‘zombie mode’ to increase protected pedestrian crossing time for those simultaneously swiping right, leaving the slowest of slow on the roadway for too long and at the mercy of the vehicle operator and prevailing environmental conditions.

The dangers of distracted drivers and pedestrians are real. But for all you zombies out there, the path to new life is clear; focus on walking instead of other distractions when crossing the road. Your health, and (possibly sooner rather than later) your wallet, will thank you.

Dr. Adam Campbell is a Senior Associate in Human Factors and Personal Injury at 30 Forensic Engineering.

[4] Verghese, J. et al. (2007). Walking while talking: effect of task prioritization in the elderly. Archives of physical medicine and rehabilitation. 88, 50-53.